Japan; Oh, the food, the food!

When asked about the food in Japan, I have to catch myself before I enter a reverie of pleasurable remembrance. Virtually every meal felt like a feast.

Jason set himself a goal — unachievable but laudable — of presenting me will all the myriad of cuisines available in Japan. The stereotype of Japan as a nation of sushi lovers is accurate, but there are innumerable other foodstuffs the Japanese enjoy. Again, having a man on the ground improved my stay immeasurably.

To give some idea of the variety on offer, an in-exhaustive list of types of food I had:

Obviously, I ate a lot of fish and other seafood whilst there; we didn’t know what a significant number of the fishes we ate were, beyond “fish”, which made things more interesting. More interesting was the sheer quantity of raw food stuffs, including meat as well as fish. I don’t think I’ve consumed such a high density of raw food ever; I’m sure it did me good.

A small selection of the more memorable dishes were a huge sheet of raw squid we had at a tiny bar in Hachinohe (produced as if by magic from a tiny kitchen); a crab in Hakodate that was great fun to pull apart with our fingers; raw horse in Aomori; a lobster which was chopped in half lengthways but was disturbingly moving its legs on one of the halves in Sendai; lamb we cooked on a brazier in a small place on my last night in Tokyo; Tempura cooked expertly at a restaurant in the back streets around Jason’s flat.

And so to a small description of two of the meals. 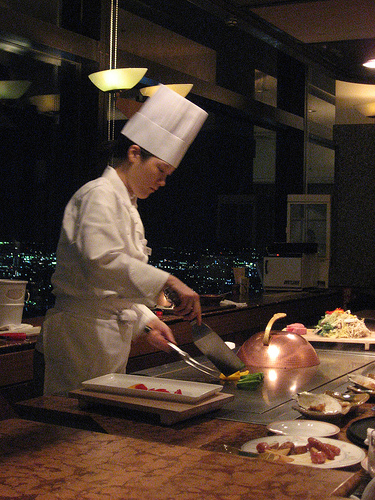 In Sendai we make our way to the top of the SS-30 building, one of the tallest in Sendai, for our evening meal. We are seated at a counter with a hot-plate immediately in front of us and a view out over the nighttime city behind through plate glass windows. After selecting a set menu from photographs alone, we settle down to wait with curiosity to see what we have ordered.

It turns out we are to have our own personal chef; he comes out and dribbles some oil onto the hot-plate whilst a waitress brings the first items for the meal — some white fish and squid.

The chef initially fries the fish on the hot-place, before dropping ice cubes onto the plate in amongst the fish — the ice immediately begins to fizzle furiously and steam — he then covers the ice and fish with a large copper hemisphere. The fish is both steamed and fried under the copper, leaving it very tender. The chef next grabs a bottle of brandy (we guess) from the windowsill behind him, whips the dome from the fish, glugs some of the spirit onto the fish and lights it; this causes a flame to rise above our heads and the air to become thick with vapourised alcohol for a moment.

At this point, we have fully realised we are in for something special.

The waitress brings the next dish, and the next, and the next; we begin to wonder when the stream of divine food will end. By the end we have had the fishes, squid, scallops, the still moving lobster and finally a perfectly cooked steak with stir fried vegetables. 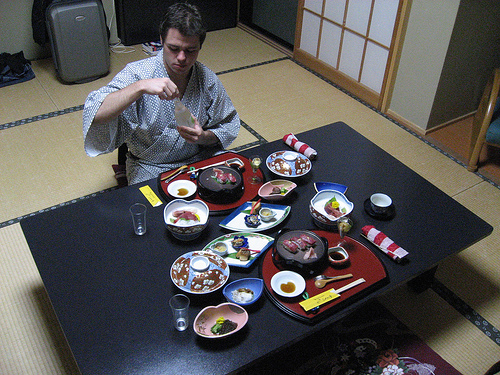 Far calmer, but equally as impressive in its own quiet way, was the traditional meal we had at a ryokan—traditional Japanese inn—in Hiraizumi.

Two ladies, one old and one younger, bring us many colourful dishes which are arranged on the table in front of us with great care. The meal is very traditional, I am told, and served very politely; Jason can only just follow what the lady is telling us, her language is so polite. This meal has a wide variety of different types of food and pickles, all washed down with sake.

These two meals provide a taste of all the amazing food I had whilst in Japan; I will remember the food I ate there for a long time.