Whilst in Japan, Jason and I took a trip to the area north of Tokyo, Tohoku, and to Hokkaido, the northern most island in the Japanese chain.

In a feet of organisation I am unlikely to match, Jason has created a map of the trip, utilising Google maps and some technical know-how to embed a map into his site.

I wrote a diary during the trip; what follows are some edited and redrafted highlights from there.

The first place we went was a small city — around one million inhabitants — called Sendai. This was a couple of hours north of Tokyo on the Shinkansen.

In Sendai we visited the shrine of one Masamune Date, the first feudal lord of the Sendai area. In addition to the shrine of Masamune Date himself, there were a number of smaller shrines for later noteworthy members of the Date clan. 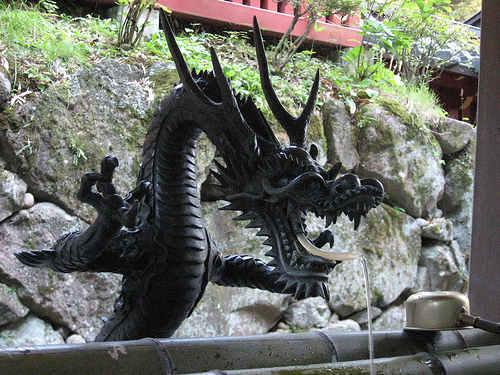 A dragon where one washed one’s hands prior to entering the shrines.

In addition to the shrines, we walked along a path into some woodland and the Children’s Cemetery; here the graves were scattered almost haphazardly in a clearing amongst the trees. 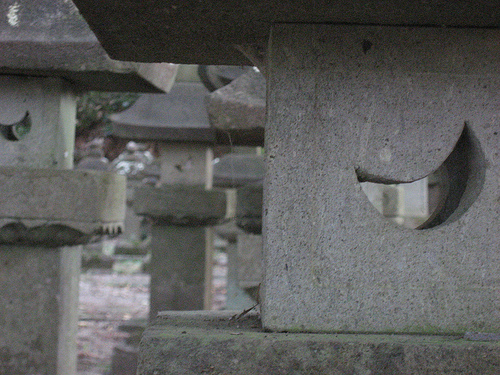 The graves in the Children’s Cemetary.

We spent four hours in the amazing JR Travel Centre, arranging travel and hotels for the next few days in broken Japanese with a fantastically patient young lady. When the itinerary is complete, we have a very swift lunch of tonkatsu — fast food, but oh so nice — we travel up to Hiraizumi, a small town. The ryokan and Hiraizumi itself are the complete opposite of the hectic bustle of Tokyo. 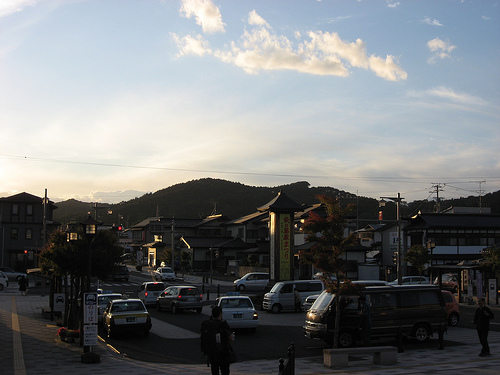 The busiest place in town: the taxi rank by the station.

In the ryokan we took an onsen — Japanese baths — and read our books. The meal in the evening was lovely, but there was nothing to do beyond that. The sake and an early night probably did us some good, however.

This was the point where I was really starting to get into The Waves, which I really cannot recommend highly enough.

An accident of communication left us stranded in Hachinohe for the night. Amazingly, the JR Travel people refunded us for the bus we absentmindedly missed, along with both the hotel and bus for the next day. They booked us into a distinctly business-man hotel, clean but uninspired after our previous nights accommodation.

For the record, there is literally nothing to do in Hachinohe. So we took the obvious route and headed out to find a bar. On the way we came across a small gallery where I bought two rather striking prints; this success made the accident of communication tolerable, as did the rather random but supremely enjoyable evening which followed.

We came upon a street of innumerable tiny bars, and stopped in one after being harangued by a greeting-lady stood outside. The bar was the size of a large dining table, and could fit around eight people in, squeezed between the counter and the windows. Somehow, this tiny bar managed to provide us with delicious sake-spirit type drinks and the largest amount of raw squid I’ve ever had the pleasure of consuming. The 6-inch square sheet of squid was produced by magic — as far as we could tell — from over the shoulder of the lady serving at the bar, in a tiny hidden kitchen space, which also held beer, spirits and freshly made tempura at other stages of the evening.

After the magic food bar, we went to an even smaller cocktail bar, which just about held four people plus the bartender. Here we made the slight error of giving the bartender all our cash and remaining until we had consumed enough Manhattan cocktails to exhaust it. This was problematic the next morning, when we thought to take a taxi from the hotel to the station. 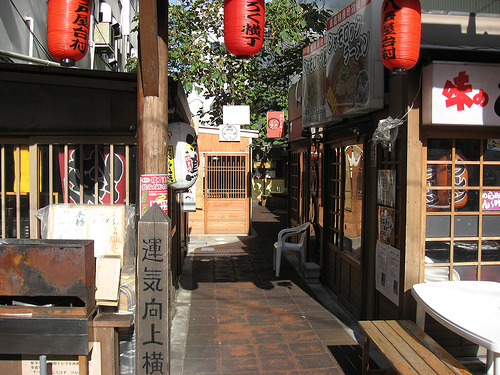 The alley of tiny bars, which we passed in the morning on our walk to find a cash machine.

We caught a ferry from Aomori to Hakodate the next day, which resulted in our having lunch in Aomori. There is an odd shaped building on the sea front at Aomori, redeemed by having a rather nice restaurant at the top overlooking the sea. 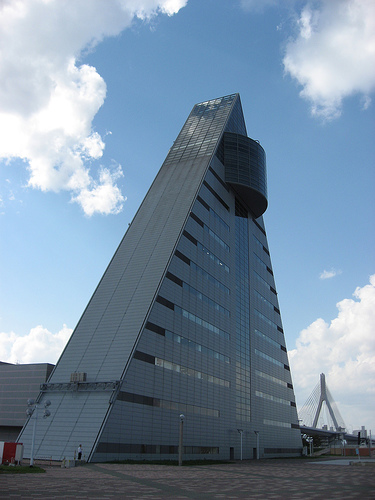 The restaurant is in the bulge at the top of the triangle.

Hakodate itself is the southern most city of Hokkaido one of the ports where trade started between Japan and Western cultures. This has left its mark on the city, and we visited the old British Consulate — where we had tea and scones — and saw a number of churches. 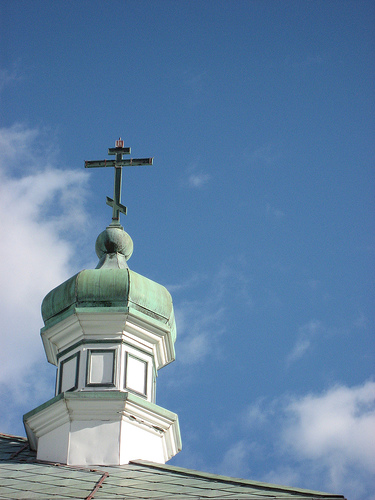 The spire of the Russian Orthodox Church in Hakodate.

We also took some pictures of fishing boats and birds whilst walking along the harbour side. 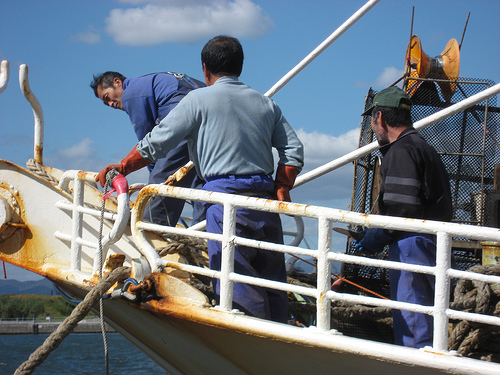 Fishermen do something on their boat using ropes. 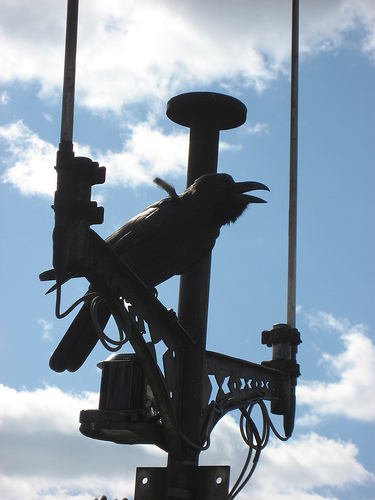 We took many pictures of this obliging photogenic crow, which strutted up and down one of the moored boats.

After Hakodate, we returned to Aomori and stayed there for a night, managing to stumble upon the Coolest Bar In Aomori, a stroke of luck.

On our last day before returning to Tokyo, we took a day-trip to Hirosaki as there wasn’t much more than the triangular building and the Coolest Bar to see in Aomori.

In Hirosaki, we went to the Castle and Botanical Gardens, where they were preparing for an Autumn Flower Festival. The weather was great that day, and we took some good photos. 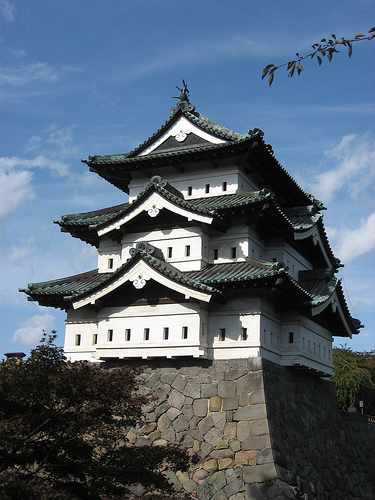 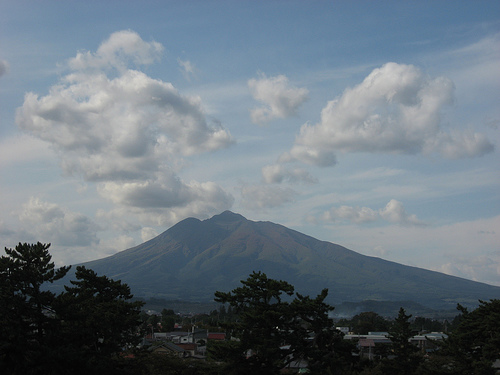 There was a pretty mountain overlooking the town. 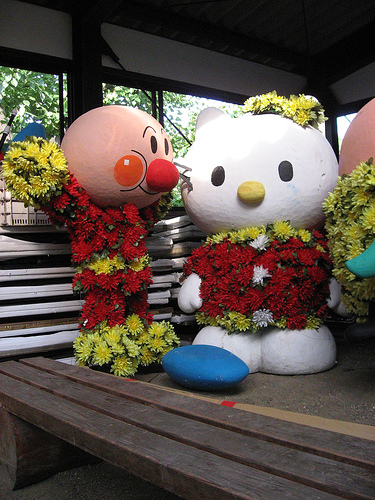 Some of the participants of the Flower Festival were a little strange. 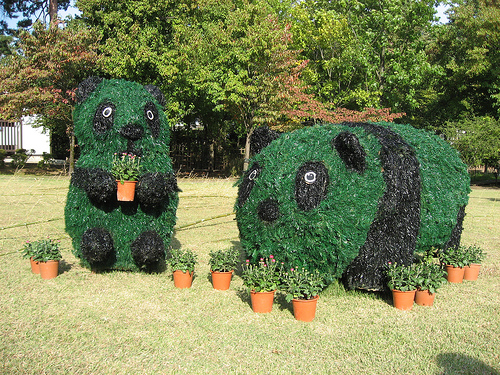 As were some other inhabitants of the Botanical Gardens.

It’s a five or six hour trip back to Tokyo from Aomori and we don’t get back until 11.30pm. We’ve done so many things over the past few days it felt many more than five nights since we left. Jason is happy to be back home, and I feel quite odd as I find Tokyo’s metropolis strangely welcoming and familiar after the days of traveling.