A few weeks ago, Des sent me an invite for Spotify, a music streaming application. In contrast to prior efforts I’ve seen, there is both a free (advert-supported) version and a subscription version for Â£9.99 which leaves out the adverts. Even better, there seems to be a good selection of artists on it.

The way it works is very simple. There’s just the usual play/pause/skip buttons and a search box. The homescreen has a top albums list and a small set of recommendations—I see plenty of ways they could improve the recommendations, like eMusic they seem rather lackluster. Last.fm really kicks their ass here.

The first thing to do is to search for music. This gives you a list of the tracks a band has on Spotify and a potted history, mostly taken from AllMusicGuide. You can then drag and drop the artist, an album or just individual tracks into a playlist to store them for later—or just rely on search, both approaches work well. 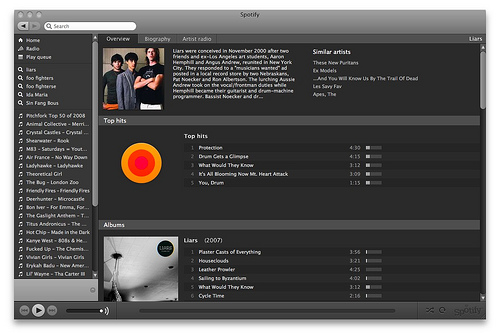 One of the things I really like is Spotify’s collaborative playlist feature. Des and I co-authored a playlist containing the albums Spotify has from the Pitchfork Top 50 Albums of 2008, an endeavor made far less tedious by splitting it between us. Even better, I can share this playlist with you. This sharing is a killer feature; I’ve been attaching album links to emails left, right and centre.

Like recommendations, they could make far more of the sharing feature, it seems like a perfect place for a social network approach. They say the current focus is perfecting the service and applications, which on balance sounds like the better, less gimmicky way to go.

From my use so far, Spotify seems to have a good selection—certainly more “popular” artists than eMusic—but still nowhere near a perfect one. For example, the Pichfork playlist Des and I created had only thirty-seven of the top 50.

The playlist view is fairly standard: 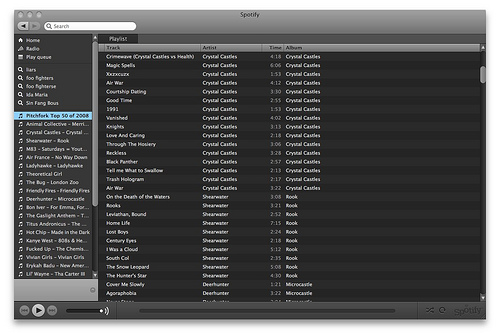 Technologically, Spotify seems to be doing all the right things. The tracks stream skip-free at high quality. The application is polished and seems stable—I’ve used it on Windows, OS X and Linux (via Crossover Office). Looking through their list of licenses for software they’ve reused shows an impeccable open source pedigree, including both ogg and vorbis decoders; rock on, guys, indeed!

Spotify was invite-only for a long time (since 2007 at least!), but as of today seems to have emerged from its larval stage, so you can sign up without an invite. Hopefully the service will remain rock solid now it’s open more widely.